From the airport to the hotel

You can reach the hotel and the airport quickly and easily by taxi, public bus and train. The hotel is located in the immediate vicinity of the Kloten-Stadthaus stop and the Kloten railway station. Both can be reached on foot in just a few minutes.

Airport Taxi from the airport
Use the official taxis marked “Airport Taxi”, as the journey can be paid for by credit card. You will find the taxis at the Arrivals 1 and 2 entrances.

Public bus from the airport
Buses run from Zurich Airport bus station to Kloten at regular intervals. Bus 731 towards Kloten-Buchhalden or bus 733 towards Kloten-Graswinkel will take you to Kloten in about 5 to 10 minutes.

Tickets for all forms of public transport can be purchased online or at the SBB ticket machines in Arrivals Halls 1 and 2, in the Check-in 3 area or at Zurich Airport station.

Train from the airport
The hotel is located close to Kloten train station and within a few minutes walking distance. Trains to Kloten leave at regular intervals. Take tram 11 or 12 from the airport to Balsberg station and change there to S7 in the direction of Winterthur. The next station is already Kloten station.

Coming from Zurich on the motorway A1, direction Winterthur, Schaffhausen and airport.
At the turn-off for Zurich-Ost take the right-handed lane. Follow the signs for Bern and Luzern.
At the turn-off Zurich-Nord take the right-handed lane following the signs for Bülach and airport.
Motorway A51
At exit number 8 leave the motorway, following the signs for Glattbrugg and Kloten
Carry on driving and turn right into the “Schaffhauserstrasse”, direction Kloten.
At the next roundabout turn left (3rd exit) and continue along the “Schaffhauserstrasse”, for approx. 200 metres.
At the roundabout turn left (3rd exit) into the “Holbergstrasse” and you will have reached your destination.

With the public transport

By train
Just 4 minutes on foot from Kloten railway station. Only 15 minutes from Zurich main railway station to Kloten station with the S7 (S trains are slow trains), and leaving every half hour. Take the subway under the track then walk around 100 metres straight ahead along the “Bahnhofstrasse”, passing a bank and the post office. When you come to a roundabout you will see the Hotel Welcome Inn; cross over the street and you will have arrived.

Why booking directly pays off: 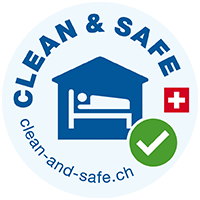 We are looking forward to your visit!

We wish you a wonderful stay!

Our offer for IATA travel agencies!

How to find our hotel in Kloten, near Zurich Airport

For any questions about our hotel or our special offers, please write to us – we look forward to hearing from you!